on January 10, 2021
Since Lin Wood's Twitter account has been suspended, I'm sharing his Parler account. Parler may go down or be difficult to access over the next few days due to the actions taken by Amazon to de-platform it.
https://parler.com/profile/linwood/posts
I'm also posting a screenshot of these messages in case Parler goes down or is brought down by the Big Tech platforms. 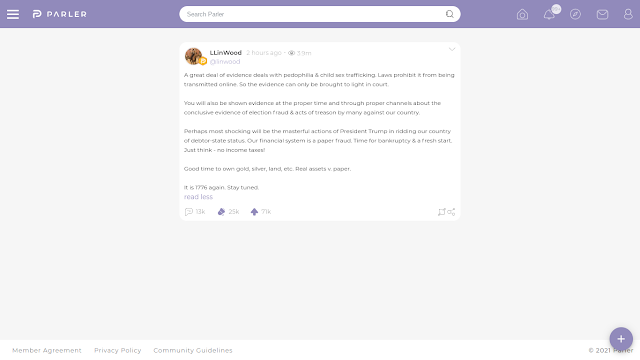 Over the next 10-14 days, you will learn shocking information about many of our government officials & wealthy elite. Child sex trafficking and pedophilia are the worldwide pandemic. Revelations will relate to Joe Biden, Barack Obama, Chief Justice John Roberts, Hillary Clinton, Nancy Pelosi, Mike Pence, Jeffrey Epstein, Bill Gates, and thousands more. I have seen the evidence. It is conclusive. This truly is the battle between good & evil.

A great deal of evidence deals with pedophilia & child sex trafficking. Laws prohibit it from being transmitted online. So the evidence can only be brought to light in court. You will also be shown evidence at the proper time and through proper channels about the conclusive evidence of election fraud & acts of treason by many against our country. Perhaps most shocking will be the masterful actions of President Trump in ridding our country of debtor-state status. Our financial system is a paper fraud. Time for bankruptcy & a fresh start. Just think - no income taxes! Good time to own gold, silver, land, etc. Real assets v. paper. It is 1776 again. Stay tuned.