This transmission was originally posted on October 17, 2019. 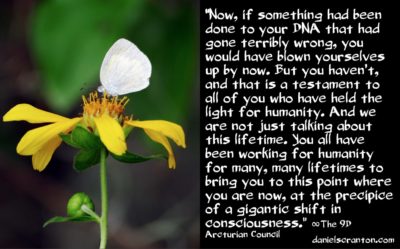 We have discovered many secrets about the past that you have led there on Earth. They are secrets because you don’t know about them yet. You have your history books and even your theories about how life began there on Earth and what the various stages were of your development, but the missing link has always been extra-terrestrial interference, masquerading as help. Sometimes you have been helped and sometimes you have been hindered, and all the while, the human spirit has kept trudging along, bringing you to this point in your development.

Now, if something had been done to your DNA that had gone terribly wrong, you would have blown yourselves up by now. But you haven’t, and that is a testament to all of you who have held the light for humanity. And we are not just talking about this lifetime. You all have been working for humanity for many, many lifetimes to bring you to this point where you are now, at the precipice of a gigantic shift in consciousness.

What you have done could not have been accomplished without those of you who were so determined to know who you really are that you wouldn’t just accept someone else’s version of the story. And now you are presented with lots of different versions of stories, and you are asked to accept them as true just because they are different from what the vast majority of humans are subscribing to. Just know that you don’t have to figure it all out. You don’t have to know every single detail of human history in order to be where you are right now and to continue to evolve and ascend.

For example, if you were to focus too much on what the reptilians or the Draco have done throughout your history, then you will never get to the point where you will forgive and love unconditionally these aspects of you that are there. They need to have their hearts opened by someone. It might as well be you, because as you open your hearts to those who have enslaved you and manipulated you, you show your true colors as Source Energy Beings.

We are not asking you to be doormats, here, or to subjugate yourselves in any way. What we are saying is that you become your fifth dimensional, higher selves by letting go of grudges and judgments and letting all aspects of yourselves come to that knowing that they are all aspects of Source. There will come a time when you won’t need any help, and there will be no way to hinder any of you, and that day is nearing. So now is a good time to let go of any story that is putting you in the camp that says, ‘We need to defeat the bad guys, and we need to do it soon!’

What you really need is more love, more light, more compassion, and that’s only going to come from accessing the infinite energy of Source that you can access at any time by going within and feeling around for it.