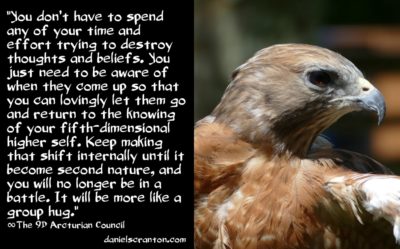 We have begun to appreciate the different challenges that you face there on Earth as beings who have allowed yourselves to be under a certain spell. Now, we see the bigger picture, and we recognize that the spell you have been under was created by you, specifically, to give you certain experiences that you could only have while holding this very limited view of self and reality. What we are now noticing is how many of you feel trapped in a loop, a loop that brings you back around to the same limiting thoughts and beliefs, and even actions.

As awake as you are, you find it difficult, if not impossible to free yourselves from the limitation that you once constructed to give yourselves a third-dimensional experience of reality. Now that you are fourth-dimensional, it is of course time to let go of these limitations and be the version of yourself that understands who you really are as Source Energy Beings.

However, these limiting thoughts and beliefs keep coming up, and they are creating an atmosphere for you that is very uncomfortable, especially when you now know better. It is as if you are in a battle of wills between your fifth-dimensional knowing and your third dimensional beliefs.

And you sometimes feel stuck in the middle, trying so hard to be of your higher self and to hold that consciousness, but then the ego still wants to survive and wants to be better than others. The ego still wants to feel separation, and it’s very tempting to go down that road of measuring yourself against others to determine your self worth. And then the fifth-dimensional part of you gets active and realizes that there is no separation and there is no need to survive, or measure yourself. That part of you knows about ascension and your infinite and eternal nature.

You don’t have to spend any of your time and effort trying to destroy thoughts and beliefs. You just need to be aware of when they come up so that you can lovingly let them go and return to the knowing of your fifth-dimensional higher self. Keep making that shift internally until it become second nature, and you will no longer be in a battle. It will be more like a group hug.