Extra-Terrestrials in the Oceans ∞The 9D Arcturian Council - Daniel Scranton


This transmission was originally posted on July 2, 2019. 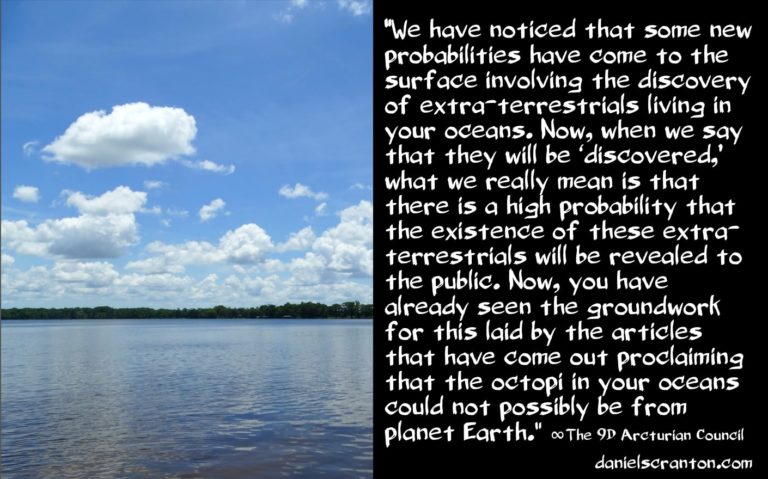 We have begun investigating the probable scenarios that lie in front of you for the second half of your calendar year, and we have noticed that some new probabilities have come to the surface involving the discovery of extra-terrestrials living in your oceans. Now, when we say that they will be ‘discovered,’ what we really mean is that there is a high probability that the existence of these extra-terrestrials will be revealed to the public. Now, you have already seen the groundwork for this laid by the articles that have come out proclaiming that the octopi in your oceans could not possibly be from planet Earth.

You are beginning to accept more and more as a society that extra-terrestrial life is a real thing, and the numbers of humans who accept that E.T.s have been on planet Earth with you is growing every day. Now, the reason why the revelation will be made about the E.T.s living in the ocean first is because most individuals do not spend a lot of time on ships and boats and those who do already know about great white sharks. They understand that the oceans can be a dangerous place, even with just the possibility of a huge storm coming. And so, it will not rattle too many of you to know that there is life from other planets living in your oceans.

Most people will still not believe that the evidence is real, if they are inclined to not believe. If they are skeptical for any reason, then the revelation will not affect them. So, it is a step forward for those of you who want full disclosure, but it is not news for those of you who want full disclosure. It is showing a willingness on the part of those who have been keeping secrets from the public to reveal more. We see this probable timeline as a sort of test to measure the response of humanity. And as we have said, we do believe that those of you who already know about extra-terrestrials will find it satisfying to see something like this revealed in a regular publication.

Even our announcing of this probable timeline creates a greater likelihood of it coming to fruition, and we are excited for all of you. We are excited to see humanity getting closer and closer to the time where you will have E.T.s walking, swimming, and flying among you.