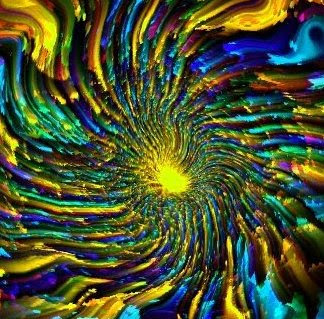 A question which is asked by any devout non-believer is ‘If God created everything, who created God?’ This has of course led to many answers and theories, mostly intellectual ones, by the believers. And these have been countered by more intellectual answers by those who choose to remain blind to the mystical part of Life.

The Rishis have taken the same question and tried to find answers, not through intellectual exercises but by way of direct exploration and experience. This exploration has led them to understand more about the Worlds and Universes that exist beyond the Supreme God, ParaBrahma. And the more we know, the more remains unknown!

Until now, Mankind had understood ParaBrahma (known as Brahman, Allah or Holy Father in other cultures) as the Supreme God, from whom everything else emerged and to whom everything will return. The Rishis were also aware that Para Brahma had emerged from an Unknown Void, like a wave in an ocean, but the exact details weren’t available. These details of the unknown were revealed when Vishwamitra Maharshi decided to explore this aspect of existence in 1950.

Vishwamitra Maharshi is one of the greatest souls in God’s creation. The Spiritual heights, Purity and Compassion of this great Soul is unparalleled in the whole of Existence. Our scriptures have recorded some of his works but most of his activities and service to mankind remain unknown. Although currently he is not one of the Hierarchy, the Sapta Rishis always consult him in all the major decisions pertaining to the administration of Creation.

This great Rishi played a major role in preponing India’s Independence by nearly 200 years. As a gift to this nation, he brought down a major power from ParaBrahma Loka in 1950. But when contacted at the astral level, none of the leaders at that time were prepared to accept this power on behalf of the nation.

He then abandoned this great power and set out to explore God’s creation. He divided himself into two parts. One part went to perform Tapas (intense meditation) while the other part began the journey of exploration. He visited all the Manifestations in the Material cosmos and Divine cosmos within Para Brahma Loka. From there, he entered the Void and set out to know more about the Unmanifested part of Creation.

It was then that the enormity of the Unmanifested part of creation was revealed. All the information about the Unmanifested Gods and Universes, as well as other Manifested Gods (similar to Para Brahma) came to light. And it was Vishwamitra Maharshi who discovered the existence of the Primordial God, Mula Brahman, from whom the entire existence has manifested. This entire journey of exploration took him nearly 30 years to complete, after which he returned in 1980.

After these initial revelations, it was only last year that more knowledge about these higher realities were revealed. The existence of 108 Unmanifested Universes, their characteristics and the role they play in our part of creation – all these came to light when some Rishis traveled to these parts. In this voyage, the Rishis also discovered more about the immensely huge Universe of Mula Brahman, the Primordial God.

We’ve understood the basics of Mula Brahman in the previous two articles. The following account is an attempt to further understand the structure and enormity of this Primordial Intelligence!

To say that Mula Brahman is Huge, Enormous or Immense would be a gross understatement. When the Rishis observed Mula Brahman from the outside, they noticed an infinite number of cells in this Universe. It was more like an extraordinarily huge honeycomb with zillions and zillions of cells. All of these cells were geometrically perfect Structures, many of them with a unique structure.

Every cell has a multitude of inner layers within it, with millions of manifestations and extensions. The cells also arranged themselves into various layers.

Our hierarchy has extended out from the 5th outer layer! When seen from Mula Brahman’s perspective, this whole 5th layer looks like a huge blue whale. So this layer is also called as ‘The Blue Whale Dominant Mula Outer Layer’.

And Manifestation happens on the tip of this hair-like projection. All the Manifested Worlds, Universes and finally the ParaBrahma Loka to which we belong exist at this tip!

Rishis have discovered that there are similar hair-like projections in every cell and in those projections, there are many more levels of Unmanifested Universes.

With the help of some special gadgets, a batch of Rishis have gone into the inner layers, to understand and explore. They are expected to return roughly after 20 years of our Earth time.

If Mula Brahman is the Primordial God, there is another aspect, a twin to this highest Intelligence. This twin which came out of Mula Brahman has been called as Sathya Mula Brahman! The Rishis discovered the existence of this Other Intelligence only in June 2010, when they were trying to understand the origin of one of the Manifested Universes!

Sathya Mula Brahman is still in His Infancy and does not have any extensions or divisions like Mula Brahman. He was extended from Mula Brahman because of the excess of energies and particles in the Primordial God.

At present, Sathya Mula Brahman has a lot of bluish-violet energies, with traces of white, green and golden coloured energies. But He is yet to completely stabilize. The composition and colours of the energies that become prominent may change later on.

When the Rishis communicated with Sathya Mula Brahman, He expressed that he stands for Truth, Oneness, Light and Love.

He further expressed that He wanted to manifest something that was new and different from any of His Brother’s manifestation. He is doing a lot of experimentation within at present and would reveal further details when these manifestations were ready!


The Importance of the number 108

We’ve already understood that the Rishis have so far discovered nearly 19 billion outer layers in Mula Brahman! And there are many hair like projections which extend out from these layers. One such hair like projection, which has come out of the 5th layer has 108 levels. These are our 108 Unmanifested Universes!

The Rishis have also discovered that, on other hair-like projections, there are many more such levels. Some have 1008 levels, 10,008 levels, 1,00,008 levels and so on. The number of these levels always begins with 1 and ends with 8, with an ascending number of zeroes in between.

The significance of these numbers exists mainly in bringing about a balance. The number ‘1’ represents Positivity while the number ‘8’ represents the other end of the scale, Negativity. Any number beginning with 1 and ending with 8 signifies a balance of these two opposite polarities! Hence the number 108 or 1008 brings an inherent stability by itself to Manifestation at the highest level.

We’ve seen earlier that Mula Brahman manifested an infinite number of Om particles. Many of these particles gathered a lot of energies and later came down as the Unmanifested Universes or Avyaktha Brahmans!

These Individual Energy fields are vast Universes in themselves! Though filled with unlimited potential, their characteristics are yet to manifest and become prominent. They have their own intelligence and can manifest out in any possible way.

Our Hierarchy has 108 such Avyakta Brahmans! Out of these, many manifestations have occurred, one of whom is our Supreme God, ParaBrahma!

The next article in this series will detail the characteristics and importance of each of these 108 Avyaktha Brahmans.


Concluding… why is this knowledge important to us ?

Man has always had an unquenchable thirst to know, seek and understand more of the Unknown part of Existence. The knowledge he gains at every step has helped him evolve more and develop his capabilities in understanding and grasping more knowledge. This is a cumulative process that takes him higher and higher in the scale of physical and spiritual evolution.

The Knowledge and awareness of these 108 Unmanifested Universes brings us more of new Energies and newer Knowledge. It lays a foundation for our entry into the Light Age. In future, various people will be able to connect to any of these Unmanifested Universes and access the energies from these Universes. Hence this knowledge has to be made available at the Physical third dimensional level, for the welfare and growth of the entire Humanity.

All these Unmanifested Universes have influenced and guided various parts of Manifestation that has occurred. So by knowing about these Universes, we can better understand the different parts of God’s creation and manifestation.

But more than anything, we have to remember that Man is an explorer!  This valuable knowledge is the result of the exploration of the finest Human beings, the Rishis. It has been discovered and brought down to our level so that we may have new understandings and insights.

This is the base upon which further exploration will happen! Let this knowledge give us such an impetus and inspiration to know more about Infinity!


The Next article in this series, Creation Part 4: The Unmanifested Universes, gives a detailed information about each of these 108 Universes.


Articles in this Series –