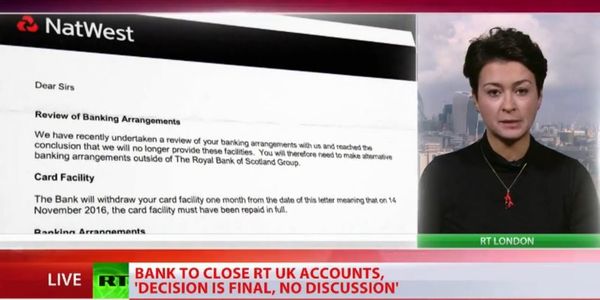 Quoting from the Introduction to this Petition:

"RT (formerly Russia Today) plays an important role in diversifying the UK's media landscape and presenting different points of view to the mainstream.

NatWest's decision to close its bank accounts in the UK is a blatant attack on that diversity and aims, ultimately, to close down its distinctive and valuable voice, and restrict choice for UK viewers. This unprovoked act of censorship is aimed, not just at RT itself, but at all those who watch and appreciate its programmes.

RT is sometimes derided by critics (including the BBC) as 'propaganda' - but it is no more propaganda than the BBC. Which is to say, that both are purveyors of news, information and commentary that reflects a particular point of view. The difference is that where the BBC invariably reflects UK government / establishment opinions and values, RT tends to do the opposite. RT's account of many contentious issues is often more credible, accurate and evidence-based than those of mainstream media."

http://www.thepetitionsite.com/takeaction/832/134/252/
Posted by arigelab at 23:32
Email ThisBlogThis!Share to TwitterShare to FacebookShare to Pinterest
Labels: Petitions, Un-Education