Laura Walker of The Oracle Report | A Brief Bio

on August 06, 2020
I am sharing a brief bio of Laura Walker of The Oracle Report from her website.

Laura Walker is a counseling astrologer and author of The Black Moon: Guide to Healing the Shadow Side and Eris: Archetype of Shadows, Crisis, and Awakening at the Completion of the Mayan Calendar.   Laura is the only astrologer to research the themes of the newly-discovered planet Eris beginning at the observatory where the planet was first sighted.

After a double-initiation with the Mahavidyas, the ten angelic Wisdom Goddesses who are aspects of Sophia intended to interface with humanity, she was given the directive to bring their spiritual teachings to others.

Laura holds a Master’s degree in Education and worked for more than fifteen years as a trauma counselor and a leading advocate for victims of sex trafficking.  Her work now has the dual focus on bringing to light and recovering the lost power trapped in our personal and collective shadow sides, thus freeing us to express our fullest potential, and to returning the story of Sophia and Thelete to consciousness.

MY STORY - Initiation With The Kalis, January 2009

My teacher looked fearful for me.  If I had understood exactly what was getting ready to happen, I would have been fearful for me, too.  I did not understand that if I failed the test, I would begin to die.

I have never been one to seek out spiritual gurus.  I believe that we are sovereign individuals with much to teach each other, and I have had many teachers along the way.    I stumbled upon this very unusual man through a series of synchronicities. As I stood in front of him, patiently waiting for him to finish fastening the ties on the white robe I was wearing, I marveled at the spark of life that burned so brightly in his eyes.  This man belonged to a brotherhood of Eastern mystics, but most people knew him only as a very successful professional and a devoted family man.

I was not his apprentice; I was his student for a brief time.  He taught me about the primordial origins of the Universe.  He did have several apprentices, however, and one of them assisted him now.  My teacher had great faith in this young man.  With sober and concentrated focus, they took special care to make sure the robe was in proper order.

The white marble hall was cavernous and silent.  Sunlight reflected off walls that had no need for decor, as Nature had painted the stone with her own hand.  I was excited about the ceremony, but at the time I did not understand that I was about to undergo not only a test, but also judgment.  I was both extremely naïve and arrogantly sure of myself.  My curiosity for learning urged me on.

Completing the task at hand, my teacher stepped back to take full stock of me.   The air hung pregnant.

Glancing at his apprentice with resignation and a twinge of exasperation, he began reciting a short prayer.  When he finished, he took a long, meditative breath.  He pointed to an opening that I hadn’t noticed off the side of the hall.  It was pitch black.  “Walk through there.  We will be waiting for you on the other side.”

I turned and walked toward the room, wondering why I had not seen it earlier.  Actually, I felt like I was being pulled toward it with tremendous force.  My exuberance quickly faded.  There was no turning back now.

My eyes stung from the darkness.  When my eyes adjusted, I was shocked to find myself at the head of an aisle that ran the length of a chamber.  Ten identical gold goddesses lined the sides of the aisle, five on each side.  They were glowing.  They stood perfectly still, watching me.  They were alive, not statues, and they looked like they were from India.

It seemed the logical thing was to walk down the aisle.  Feeling frozen in place, I willed myself forward.  I tried to remain centered under the force and intensity of their gaze.  I knew that my worthiness was being judged.  I was completely exposed.

After what seemed like an eternity, I finally came to the end of the aisle and the room’s exit.  And then something caught my attention.  Another chamber seemed to appear out of nowhere.  But this one was illuminated in a different way.  This room radiated vitality, liveliness, and movement.  Flickers of colored light buzzed through the air like a swarm of cosmic lightning bugs.  Images of swirling galaxies whipped along the walls.  This room didn’t pull me toward it like the first room had; it beckoned me.  I had the choice to enter or not.  I decided to answer its call.

Once again I found myself at the head of an aisle and once again the ten goddesses lined the sides.  This time they were black and gold, each dressed in a unique, elaborate costume, each posing in a different yoga posture.  They were as beautiful as they were fierce.  Their presence filled the space.

I knew this time wasn’t going to be as easy.  The furious activity was dizzying.  I didn’t know up from down and tried to maintain equilibrium as I started down the aisle.  I looked directly at each goddess as I passed her, feeling each one peering through me straight to my soul.  Enormous pressure welled up inside my head and I thought I would shatter into millions of tiny pieces.  I feared for my sanity but I kept walking.

When I reached the tenth and final goddess, she sprang out of her posture like a pouncing lioness.  She landed in front of me and extended her right hand.

I was startled by her quick movement and stunned by the offering of her hand.  But in that moment, I thought that I should not shake her hand in the normal way one would shake hands.  We were not the same, not equals.  I do not know why I did what I did next.

I turned her hand over and kissed it.

A smile broke across her face.  “Yes!  Exactly!” she squealed, jumping up and down.  She was overjoyed.

In a wave of celebration, the other goddesses jumped from their positions to gather around me, showering me with love and excitement.  From behind, they placed a breastplate of many long necklaces with blue stones around my neck and something on my head that I couldn’t see.  The tenth goddess then turned to me.

“You are to bring spirituality to the people.  The time of change is upon the world.  Come.”

Thus began my continuing instruction with the Mahavidyas, the Wisdom Goddesses from tales before time.  I did not know them by that name until years later.  To me, they were The Kalis, and I called them so.

The Oracle Report and all of its related work is my effort to fulfill the mission given to me by these great goddesses. 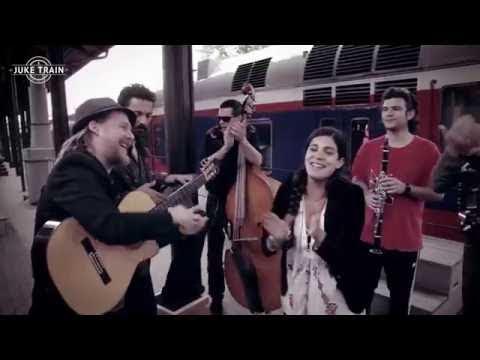 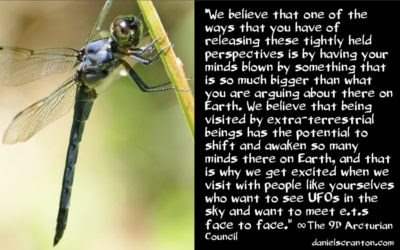 Content Source/Owner :  DanielScranton.com Original Post link :  https://danielscranton.com/ufos-face-to-face-e-t-contact-are-on-the-rise-%e2%88%9ethe-9d-arcturian-council/ Video direct url :  https://youtu.be/_ZBgN6tbUU4 This transmission was posted on June 23, 2020 “Greetings. We are the Arcturian Council. We are pleased to connect with all of you. We have many different perspectives that we hold simultaneously, without giving more weight to any one of these many perspectives, because we understand the value of being able to see a situation from as many angles as possible. The issue that you are having there on Earth is that you tend to cling to one perspective, and you see your perspective as you taking a side. And therefore, if someone else has a different perspective than you, they are on the other side. And then the two sides are always trying to defeat each other and prove that the other side is wrong. We know how you get so clingy when it comes to the perspe