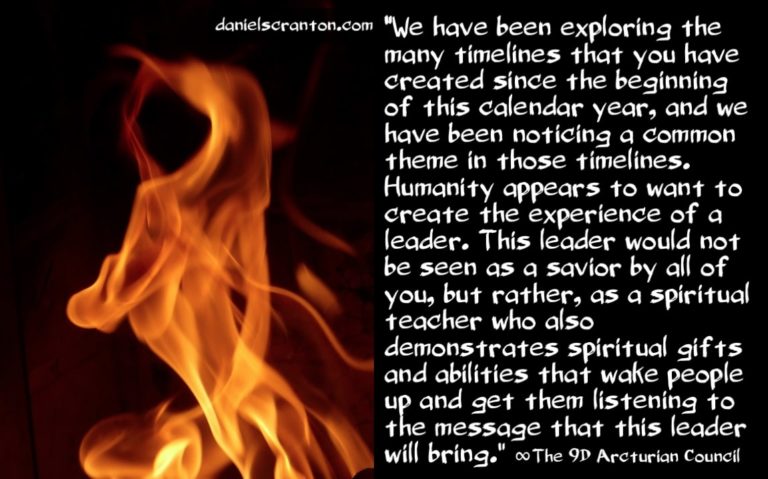 We have been exploring the many timelines that you have created since the beginning of this calendar year, and we have been noticing a common theme in those timelines. Humanity appears to want to create the experience of a leader. This leader would not be seen as a savior by all of you, but rather, as a spiritual teacher who also demonstrates spiritual gifts and abilities that wake people up and get them listening to the message that this leader will bring.

Now is a time when someone can easily gain millions of followers on the Internet, even without ever appearing in a movie or television show. Therefore, the possibility of a human living among you, rising up to a level of fame and notoriety that would parallel that of your biggest movie stars and pop stars is very high. There is an asking that the human collective consciousness has done, and that asking is for a person to be one who will unite the opposite ends of the spectrum, in terms of what you all believe in.

We are talking about someone who can bring together the new age community, all religions, and atheists. We are talking about someone who can even gain the respect of the scientific community. Now, of course, people will project their own beliefs onto this individual, making them out to be someone they are not, but ultimately that won’t even matter because the message being delivered will be so strong and so powerful. If being on one of these timelines is appealing to you, then we recommend that you harmonize with this story that we are telling and that you are subconsciously co-creating.


We can see this potential as one that will result in the awakening of so many on your planet that the changes will start to occur that you have all been anticipating, and from what we can see this is an individual that has no notoriety on the global scale at this time. So you don’t need to start guessing about who it is or who it will be, but you do want to start feeling for what this person who unites the human collective consciousness might feel like to you. You do want to start imagining that reality and how you would feel in it.

You, as a collective, are ready for some very big changes, and you are the ones co-creating these timelines. We are just the ones reporting the facts as we see them, and they are pretty exciting facts to be witnessing, from our perspective.